Damghan (Persian: دامغان‎, romanized: Dāmghān) is the capital of Damghan County, Semnan Province, Iran. At the 2006 census, its population was 57,331, in 15,849 families. It is situated 342 km (213 mi) east of Tehran on the high-road to Mashad, at an elevation of 1,250 m (4,101 ft). It is one of the oldest cities on the Iranian plateau, stretching back 7,000 years, and boasts many sites of historic interest. The oldest of these is Tappeh Hessar, lying to the southeast of the city, which holds the ruins of a castle dating from the Sasanian Empire.
The Tarikhaneh is one of the oldest mosques in Iran, built as a fire temple during the Sassanid dynasty, it was converted into a mosque after the advent of Islam. There are also many other historical buildings belonging to the Seljuk Empire and other periods. Apart from its historical interest, the city today is mainly known for pistachios and paper almonds (kaghazi) with very thin shells. 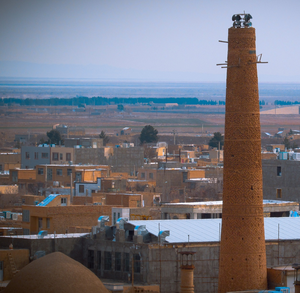 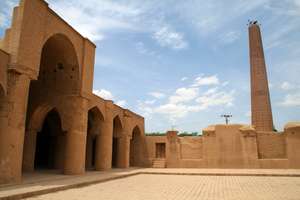