Commonwealth Stadium, also known as The Brick Field at Commonwealth Stadium during Edmonton Football Team events (formerly called Edmonton Eskimos), is an open-air, all-seater multipurpose stadium located in the McCauley neighbourhood of Edmonton, Alberta, Canada. It has a seating capacity of 55,819, making it the largest open-air stadium in Canada. It has been used for Canadian football, athletics, soccer, and rugby union, as well as concerts.
Construction commenced in 1975 and the venue opened ahead of the 1978 Commonwealth Games (hence its name), replacing the adjacent Clarke Stadium as the Edmonton Football Team’s home. It received a major expansion ahead of the 1983 Summer Universiade, when it reached a capacity of 60,081. Its main tenant is the Edmonton Football Team of the Canadian Football League (CFL), and has hosted five Grey Cups, the CFL's championship game. The stadium had remained the only CFL venue with natural grass for a long time, until FieldTurf Duraspine Pro was installed in 2010.
Soccer tournaments include nine FIFA World Cup qualification matches with Canada Men's National Soccer Team, two versions of the invitational Canada Cup, the 1996 CONCACAF Men's Pre-Olympic Tournament, the 2002 FIFA U-19 Women's World Championship and the 2007 FIFA U-20 World Cup, the 2014 FIFA U-20 Women's World Cup and the 2015 FIFA Women's World Cup. FC Edmonton played its Canadian Championship matches at Commonwealth Stadium from 2011 to 2013. The stadium is also listed as a potential site for the 2026 FIFA World Cup, which Canada will co-host with Mexico and the United States.
Other events at the stadium include the 2001 World Championships in Athletics, the 2006 Women's Rugby World Cup and three editions of the Churchill Cup. 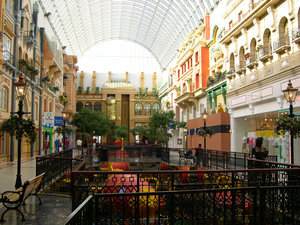