The Centre Region (French: Région du Centre) occupies 69,000 km² of the central plains of the Republic of Cameroon. It is bordered to the north by the Adamawa Region, to the south by the South Region, to the east by the East Region, and to the West by the Littoral and West Regions. It is the second largest of Cameroon's regions in land area. Major ethnic groups include the Bassa, Ewondo, and Vute.
Yaoundé, capital of Cameroon, is at the heart of the Centre, drawing people from the rest of the country to live and work there. The Centre's towns are also important industrial centres, especially for timber. Agriculture is another important economic factor, especially with regard to the province's most important cash crop, cocoa. Outside of the capital and the plantation zones, most inhabitants are sustenance farmers. 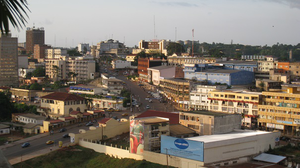