Cabinda (also spelled Kabinda, formerly called Portuguese Congo, Kongo: Kabinda kizunga) is an exclave and province of Angola, a status that has been disputed by several political organizations in the territory. The capital city is also called Cabinda, known locally as Tchiowa. The province is divided into four municipalities—Belize, Buco-Zau, Cabinda and Cacongo.
Modern Cabinda is the result of a fusion of three kingdoms: N'Goyo, Loango and Kakongo. It has an area of 7,290 km2 (2,810 sq mi) and a population of 716,076 at the 2014 census; the latest official estimate (as at mid 2019) is 824,143. According to 1988 United States government statistics, the total population of the province was 147,200, with a near even split between rural and urban populations. At one point an estimated one third of Cabindans were refugees living in the Democratic Republic of the Congo; however, after the 2007 peace agreement, refugees started returning to their homes.Cabinda is separated from the rest of Angola by a narrow strip of territory belonging to the Democratic Republic of the Congo, which bounds the province on the south and the east. Cabinda is bounded on the north by the Republic of the Congo, and on the west by the Atlantic Ocean. Adjacent to the coast are some of the largest offshore oil fields in the world. Petroleum exploration began in 1954 with the Cabinda Gulf Oil Company, when the territory was under Portuguese rule.Cabinda also produces hardwoods, coffee, cacao, rubber, and palm oil products; however, petroleum production accounts for most of Cabinda's domestic product. Cabinda produces 700,000 barrels (110,000 m3) of crude oil per day. Cabinda Oil is associated with Sonangol, Agip Angola Lda (41%), Chevron (39.2%), Total (10%) and Eni (9.8%).
In 1885, the Treaty of Simulambuco established Cabinda as a protectorate of the Portuguese Empire, and Cabindan independence movements consider the occupation of the territory by Angola illegal. While the Angolan Civil War largely ended in 2002, an armed struggle persists in the exclave of Cabinda. Some of the factions have proclaimed an independent Republic of Cabinda, with offices in Paris. 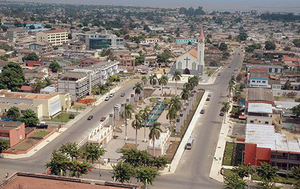