Belém ([beˈlẽj]; Portuguese for Bethlehem) is a Brazilian city with 2,491,052 people residing in its Metropolitan Region. The capital city itself has 1,485,732 inhabitants (for more details on its population see in Demographics below). It is the capital and largest city of the state of Pará in the country's north. It is the gateway to the Amazon River with a busy port, airport, and bus/coach station. Belém lies approximately 100 km upriver from the Atlantic Ocean, on the Pará River, which is part of the greater Amazon River system, separated from the larger part of the Amazon delta by Ilha de Marajó (Marajo Island). With an estimated population of 1,439,561 people — or 2,249,405, considering its metropolitan area — it is the 11th most populous city in Brazil, as well as the 16th by economic relevance. It is the second largest in the North Region, second only to Manaus, in the state of Amazonas.
Founded in 1616 by the Kingdom of Portugal, Belém was the first European colony on the Amazon but did not become part of Brazil until 1775. The newer part of the city has modern buildings and skyscrapers. The colonial portion retains the charm of tree-filled squares, churches and traditional blue tiles. The city has a rich history and architecture from colonial times. Recently it witnessed a skyscraper boom.
Belém is also known as the Metropolis of the Brazilian Amazon region or the Cidade das Mangueiras (City of Mango Trees) due to the vast number of those trees found in the city. Brazilians often refer to the city as Belém do Pará ("Belém of Pará") rather than just Belém, a reference to an earlier name for the city, Santa Maria de Belém do Grão Pará, and also to differentiate it from a number of other towns called Belém in Brazil, as well as the Palestinian city of Bethlehem. It is named after Santa Maria de Belém in Lisbon, also better known by its shortened name, Belém.
Belém is served by two airports: Val de Cans International Airport, which connects the city with the rest of Brazil and other cities in South America, North America (USA) and Europe (Lisbon) and Brig. Protásio de Oliveira Airport (formerly called Júlio César Airport) dedicated to general aviation. The city is also home to the Federal University of Pará and the Pará State University. 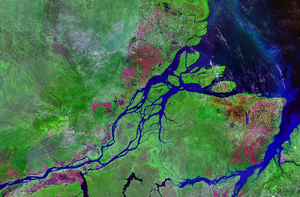