Aunuʻu is a small volcanic island off the southeastern shore of Tutuila in American Samoa. It has a land area of 374.83 acres (0.59 sq mi; 1.52 km2) and a 2010 census population of 436 persons. Politically it is a part of the Eastern District, one of the primary divisions of American Samoa. The island is located in Saʻole County.Faimulivai Marsh is a freshwater marsh in Aunuʻu Crater and the largest such wetland in American Samoa. It was formed from the drainage of the low-lying crater. It is part of a protected National Natural Landmark on Aunuʻu which was designated in 1972. The Pacific black duck was seen in the marsh in 1976, but it may now be extinct in the region; another significant local bird is the purple swamphen. This marsh is the only place in American Samoa that has Chinese water chestnut.[1]The main sources of economic activity for the Aunuʻu people since the 1960s have been taro and production of faausi. 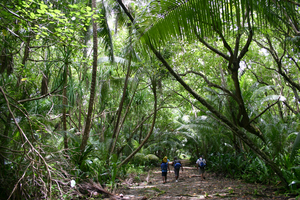