Ardestan (Persian: اردستان‎, also Romanized as Ardestān and Ardistān) is a city and capital of Ardestan County, Isfahan Province, Iran. At the 2006 census, its population was 14,698, in 4,077 families.Ardestan is located at the southern foothills of the Karkas mountain chain and is 110 km northeast of Isfahan. It is believed the city has been founded in Sassanian times and was strongly fortified in the 10th century. A Seljuk-era mosque, a bazaar, several ab anbars, and historical houses of the old town are among the tourist attractions of Ardestan. Mulberry, pomegranate and a special kind of fig are the main orchard products of the town.
It has been said that the birthplace of Hassan Modarres. 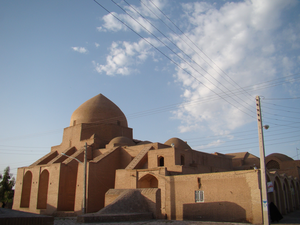