Ardakan (Persian: اردكان‎, also romanized as Ardakān and Artagan) is the capital city of Ardakan County, Yazd Province, Iran. At the 2016 census, its population was 75,271 in 22,475 families.Ardakan is the second major city of Yazd Province. It was established in the 12th century in the Zardug region. Ardakan is 60 kilometres away from Yazd, and it has dry weather.
The word Ardakan in Persian means "holy place" or "clean place" (Modern Persian: arda+kan / Middle Persian: arta+gan) and the city has many historical religious attractions such as the Grand Mosque of Ardakan (Masjed-e Jame’), Zire-deh Mosque, Emam-Zadeh Mir Seyyed Mohammad and Tekyeh bazaar.
This region is one of the Zoroastrian centres of Iran, and there are numerous holy sites for Zoroastrians in Sharif-Abad, a village near Ardakan. Each summer thousands of Zoroastrians from around the world gather there for pilgrimage.
The most important shrine is Pir-e Sabz Chak Chak. Other shrines include Pir Shah Eshtad Izad, Pir Shah Tashtar Izad, Pir Shah Mehr Izad and Pir Shah Morad.
Ardakan is the birthplace of former Iranian president, Mohammad Khatami. It is also a famous type of carpet found around the world. 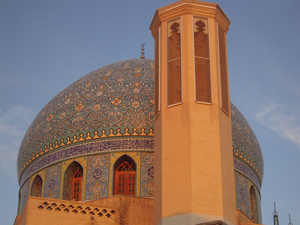