Angren (Uzbek: Angren/Ангрен; Russian: Ангрен; Tajik: Ангрен) is a city in eastern Uzbekistan. The city is located on the Angren River 70 mi (110 km) to the east of Tashkent. The City of Angren was created in 1946 from the villages of Jigariston, Jartepa, Teshiktosh, and Qoʻyxona which had emerged in the rich Angren coal basin during World War II.
There were several large coal mines and factories in Angren during Soviet times. Following the collapse of the USSR, the majority of these factories were abandoned. A lack of professionals and machinery, mismanagement, and falling income levels — all contributed to this downfall. While Angren was once an important industrial center, nowadays it gives the impression of an abandoned city and is often referred to as a ghost town.
Still, Angren has retained some of its industrial importance. The city is home to a once considerable and still functioning coal mining industry. It also has a large construction-materials industry, a rubber processing plant, and a power station. 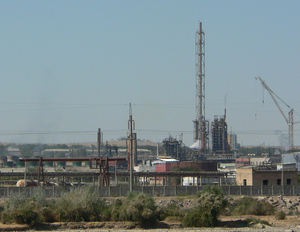