Amapá ([amaˈpa] (listen)) is a state located in the northern region of Brazil. It is the second least populous state and the eighteenth largest by area. Located in the far northern part of the country, Amapá is bordered clockwise by French Guiana to the north, the Atlantic Ocean to the east, Pará to the south and west, and Suriname to the northwest. The capital and largest city is Macapá. The state has 0.4% of the Brazilian population and is responsible for only 0.22% of the Brazilian GDP.
In the colonial period the region was called Portuguese Guiana and was part of Portugal's State of Brazil. Later, the region was distinguished from the other Guianas. Amapá was once part of Pará, but became a separate territory in 1943, and a state in 1990.The dominant feature of the region, and 90 percent of its total area, is the Amazon Rainforest. Unexplored forests occupy 70 percent of Amapá, and Tumucumaque Mountains National Park, established in 2002, is the largest tropical forest park in the world. The estuary of the River Oiapoque is the northernmost point of coastal Brazil. 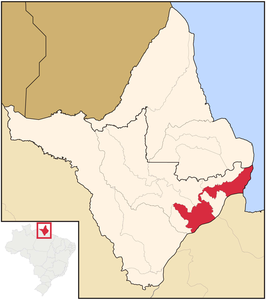