Aktau (Kazakh: Aqtaw; Cyrillic: Ақтау) is a city in Kazakhstan, located on the Eastern shore of the Caspian Sea. Its current name means "white mountain" in Kazakh, which may be due to its cliffs that overlook the Caspian. From 1964 to 1991 city was known as Shevchenko (Russian: Шевченко). Its former name was given due to the eponymous Ukrainian poet's period of exile in the area. It is located on the Mangyshlak Peninsula and is the capital of Mangystau Region.
Aktau is known for its unique block address system. Almost no streets in Aktau have names; instead, addresses generally consist of three numbers: the district number (also known as micro-region/micro-district/block), the building number, and the apartment number. This is because Aktau was originally planned as a camp for the workers of the oil industry. 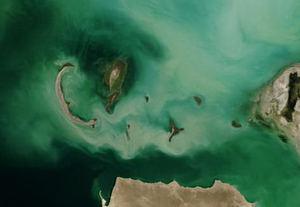